Why I Won’t Give You a Discount 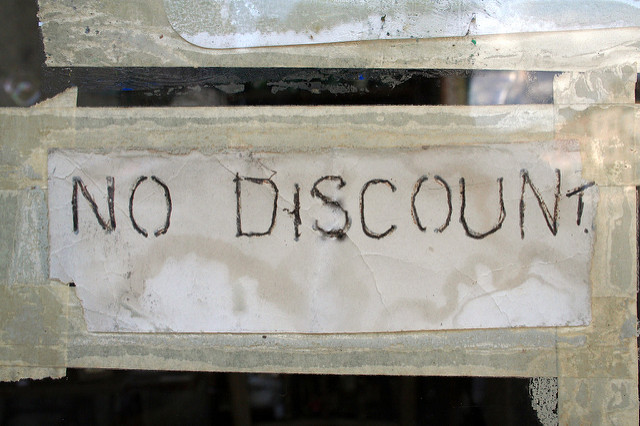 Photo by Hugh Sanders with permission via Creative Commons

I recently received an email from a nonprofit community, asking me to facilitate a three-day retreat for the whopping rate of $500. The other benefits I was offered included “exposure,” a “cool venue,” and a chance to be “creative.”

My standard day rate is $3000 plus expenses; for nonprofits I’ll generally discount to $2000. I’ve calculated that for every hour of face-to-face facilitation/training time, I spend an average of three hours in preparation, planning, and follow up. So a three day event like this represents  ten to twelve days worth of work. My rates take this into account, as well as my overhead expenses as a business owner.

Being offered less than 10% of market rate is insulting, especially when told I’m being solicited because of my “skills and credibility” within the field.

The few times I’ve accepted work significantly below my usual rates, I found myself becoming resentful and the client did not get the best of me. The other thing that happened is that they started EXPECTING that what they paid me was a reasonable rate – they never hired me back at full rate but expected a discount again, so the whole idea of doing it cheap for “exposure” backfired.

I have always found it odd that folks in nonprofit, cooperative, intentional community circles say they value the type of work I do but do not demonstrate it financially. I’ve never seen a community ask an architect or plumber or contractor  to give them a discount, but facilitators, speakers, artists, and other freelancers get asked this on a frustratingly regular basis.

I know many members of these communities who spend a lot of money going to therapists, Burning Man, concerts, and yoga retreats; but they are reluctant to pay a decent rate to fix their communication and consensus processes when they are broken. What does this say about  those community values?

2 Responses to Why I Won’t Give You a Discount