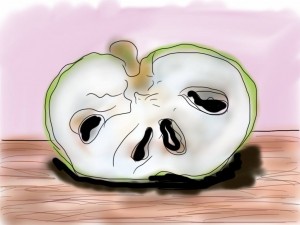 I’m now into Month 3 in my quest to do something new every day. My birthday in February was quite delightful – I let go of my control freak ways and let my wife plan an entire day of newness. I never knew what was next until it happened. It was a blast!

Here are some of my activities since I last wrote about my quest. In the unusual food category, I’ve eaten dragon fruit, poutine, pizza with arugula, popcorn with no butter, cherimoya, dulce de membrillo, and homemade pop-tarts. I drank a Red Bull, with no discernable effect. I’ve fasted and tried the Paleo diet. I am in love with cherimoyas (portrait to the right) and poutine turned out to be surprisingly tasty. (I’ve always thought it sounded disgusting.)

I’ve been Sufi dancing and pole dancing.  (You may place bets on which one of those two I will repeat and which I won’t.)  I took a very tourist-y tour of San Francisco, went to a casino, and  bought my first lottery ticket.  I participated in a Day of Remembrance commemorating the WWII internment of Japanese-Americans.  The county fairgrounds and vets building host all kinds of shows – this month I’ve attended an orchid show, a cat show, and a fishing tackle & duck decoy show.

Art-wise, I attended a lovely exhibit at the Palace of Legion of Honor, went to a life drawing session, and tried arranging flowers.

I attended university lectures in physics and engineering; despite never having taken a course in either, I was happy that I understood most of what they were saying! My other self-improvement attempts included a day of no swearing, a dinner party with no alcohol, and a meeting during which I kept my big mouth shut.

I’m not always good at sticking to my change plans – exercising, eating, keeping organized, etc. But I have only missed one or two days of doing something new! I think the key is DOING something, rather than NOT doing something.